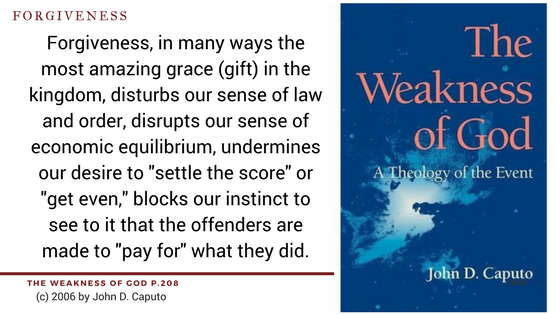 Last week’s sermon on John 3:16 brought us to an invitation to be forgiven. This is the promise that is made to Israel in this week’s passage from Jeremiah 31:31-34;

“No longer shall they teach one another, or say to each other, “Know the Lord,” for they shall all know me, from the least of them to the greatest, says the Lord; for I will forgive their iniquity, and remember their sin no more.”

We see in the words of the prophet Jeremiah that God is not promising to forgive Israel because of their faithfulness. Instead, God promises that the people will no longer need to seek out forgiveness, because they will already know that they are forgiven.

Christians are a forgiven people

The promise that Israel are a forgiven people, is the promise that Christians believe is fulfilled in Jesus Christ. Through Jesus’ life, death, and resurrections, we are told that we are a forgiven people. We no longer need to live according to a law that constantly holds our guilt in front of us. Instead, the covenant that God has made with us is that no matter what, even when we put God’s own son to death; we are forgiven. God’s grace is forgiveness before we ask for it, and we can know this forgiveness by heart.

So, we are forgiven. What now?

Next Sunday, we will celebrate Jesus’ entrance into Jerusalem on Palm Sunday. We will consider the ways in which Jesus entrance parade contrast the Roman military parade. As a forgiven people we look forward to what it looks like to truly identify with being God’s beloved children. Jesus again resists the temptations that were put before him in the wilderness. Like Jesus, we are empowered by forgiveness and love to resist temptations to identify ourselves as anything other than God’s beloved children.

Lent is a season of preparation where we examine our relationships with God, our neighbors, and ourselves. We look into the depths of our own souls and ask what it is that might be standing between us and our true identity as God's beloved children. Lent provides us the opportunity to turn away from the messages all around us that tell us that we are anything other than God's beloved children. Join us on this journey through Lent and we prepare to participate in the Resurrection.


Exit 53 off 495, Turn on Broad Street toward River Road, turn right and church is at the top of the hill. Plentiful street parking. Map

For more information please feel free to use our contact form.